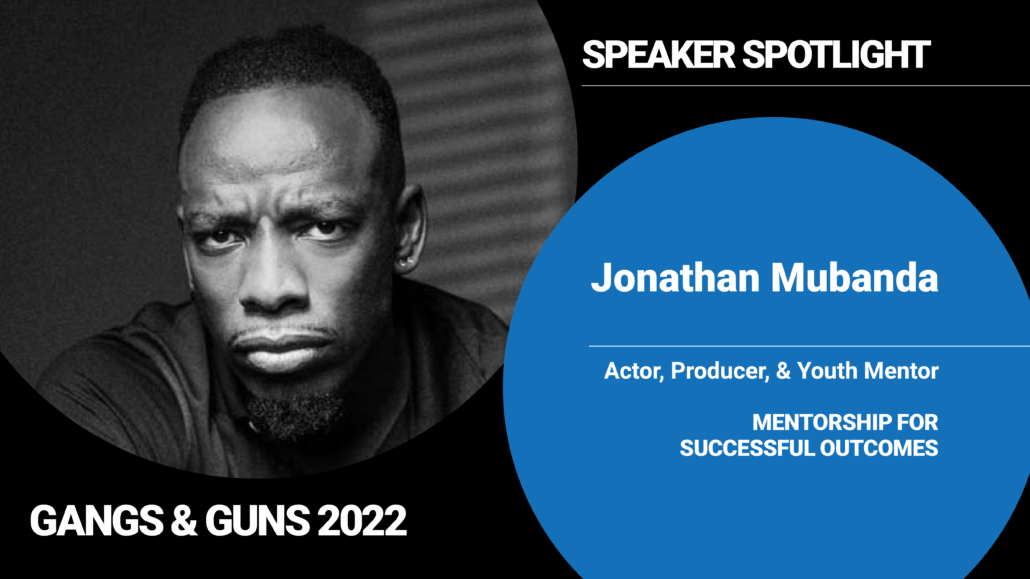 The streets of Vancouver were nothing for Jonathan Mubanda. He was a child of civil war. Mubanda grew up in Kampala, Uganda during the 80s and lived through violence and deprivation. “It was real war. I remember my Dad walking us to school and seeing a heavy military presence along the street. We were living with that constant fear, hearing gunshots all the time. You never knew when a fight could break out between the military and the rebels. Your trauma is different when you grow up like that.” 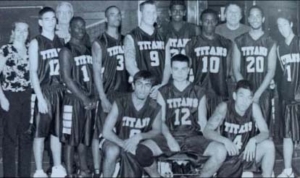 His family eventually found their way to Vancouver to escape the violence. In school, he recalls being surrounded by diverse cultures and both positive and negative peer groups. The one constant he had in his life was basketball, a sport he played with his brother David. “We were poor, so my brother and I picked up the cheapest sport we could and became good at it,” he says with a laugh. Basketball led him to someone who would become a lifelong mentor—a young female coach by the name of Theresa Campbell (now CEO of Safer Schools Together).

“Vancouver at the time was experiencing escalating gang violence,” says Campbell who was then serving as the Coordinator of Community Schools at the Vancouver School District. “One of our strategies was to help identify the high-risk students in the community. We kept gyms open on evenings and weekends so youth would have a place to go to avoid violence in the community.”

Mubanda recalls Campbell planning a basketball tournament in East Los Angeles. “We wanted to be a part of that, and that in itself kept us out of trouble.” While the boys saw it as a fun trip, Campbell’s motives were strategic. “I wanted to get them out. Most of these boys had never been out of East Vancouver.” 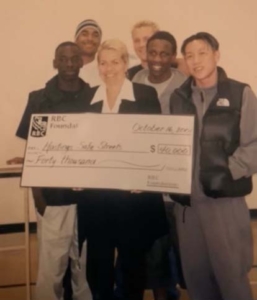 Jonathan and Theresa pose with a cheque for Safe Haven, a community initiative that aimed to make East Hastings safe for youth.

This was a risky but smart move. “That experience humbled us,” says Mubanda. We thought we were tough kids from East Van,” he recalls. While driving down to a game they were stopped by the police. The officer told everyone who was wearing red to take off their shirts, as they were entering a Crips school. “The school was on lockdown while we were playing because the games could get so violent,” he says. “Our team was shook. We visited areas that were not comfortable. Nice neighbourhoods were adjacent to ghettos—it was a different world.” Campbell also took them to Disneyland and showed them the California shoreline. “I wanted to open their eyes a bit,” she says. 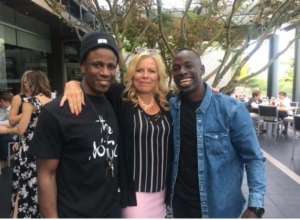 Although he had pro-social outlets and support from district staff, towards the end of high school, Mubanda found himself engaging in some underboard activities and associating with negative peer groups. “I was a poor kid from a poor family. I did what I had to do to make money,” he says.

Throughout it all, Campbell maintained contact. “Theresa was always around, checking in—trying her best to create environments that we wanted to be a part of,” he says. It was ultimately the birth of his daughter that pushed him to finally ask Campbell for help. “I wasn’t going down the right path, and I didn’t want to bring my daughter into that world,” he says.

Campbell gave him a job, first opening gyms for youth in the neighborhood on evenings and weekends. Later, she hired him as a Safe School Liaison when she moved to the Surrey School District. “I call her Mother Theresa because she was always there for us. She showed me what mentorship looked like and how it should be done. Today I try to do the same for the youth I work with,” says Mubanda. 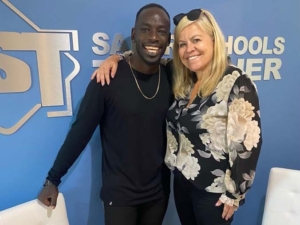 Jonathan and Theresa at the SST Office.

Despite the unlikely pairing (a young blonde basketball coach and a high-risk kid from war-torn Uganda), Mubanda and Campbell’s story illustrates the power of relationships.  “Being able to stay involved with them made me see the power of connectedness firsthand. As a coach or volunteer, it’s important to find out what youth want us to know about them, and make sure we’re developing relationships in and out of the sport,” says Campbell. “A lot of those boys especially David and Jonathan saw the value of the connection and they’ve gone on to do amazing things themselves.”

Jonathan will share his story and the successful strategies he uses in his work with youth at the 14th Annual Gangs & Guns Symposium on February 11th.