According to a recent study, 45 per cent of first responders in Canada have symptoms consistent with at least one mental health disorder. In contrast, reports from Statistics Canada state that the rate for the general population is 10 per cent. This fact in itself is not surprising. Many first responders have to confront trauma on an almost daily basis. What is surprising, however, is the widespread belief that unchecked Post Traumatic Stress Disorder (PTSD) is something that front line responders have to live with as a part of their job.

“Police officers have this ‘suck it up’ attitude when it comes to their mental health,” says Retired Abbotsford Police Chief Bob Rich. “In reality, it takes more courage to admit when you’re struggling,” Rich speaks from experience. In 2015, he lost two Abbotsford members to suicide. Their deaths shook him. Since then, he’s made it his mission to promote mental health to police forces and their families across North America.

Ret. Chief Bob Rich didn’t set out to be a police officer. His initial plan was to become a lawyer. He had completed law school and started articling when his wife noticed that he wasn’t enjoying his chosen profession. “I was miserable. I had spent four months previously with the RCMP in a special program for law students and loved it,” he says. “My wife being wise, encouraged me to go into policing instead.”

“I knew that small-town policing wasn’t for me. My wife and I are big city people. The RCMP can send you anywhere in Canada, so I decided to join the Vancouver Police Department (VPD) instead.”

In 1980, Rich started his career on the road with the VPD. Standing at 5’8”, he almost didn’t make the cut. This was back when the VPD had minimum height requirements for their members. “I wrote a letter to ask them to make an exception for me to join. When I got in, other officers dubbed me, Constable Snowflake, because of my fair complexion,” says Rich with a laugh.

Rich was quickly identified as a valuable asset on the administrative side because of his law degree. His legal background lent itself well to the planning and research unit. After a few years in different areas like dispatch, surveillance, downtown east side patrol, and information and privacy, Rich replaced a civilian member as the head of Human Resources. He then went on to become Deputy Chief and was placed in charge of operations.

His career with the VPD had reached an all-time high when he ran for VPD Police Chief in 2007. Rich ultimately lost that spot to Jim Chu. Having climbed as high as he could go in the VPD, Rich jumped at an opportunity to be the top cop with the Abbotsford Police Department (APD).

Setting a New Tone in a New Town

“When I got to Abbotsford, it was the murder capital of Canada. My goal was to bring the crime rate down,” says Rich.

To paint a picture, according to a 2018 CBC article, “When Bob Rich took over as the Abbotsford Police Department’s Chief Constable in 2008 … The Red Scorpions and United Nations — two Fraser Valley gangs embroiled in a brutal war — were shooting at each other in strip mall parking lots, outside restaurants and on serene suburban streets.”

Using a variety of innovative strategies, APD was able to significantly reduce gang violence. In 2011, the city of Abbotsford saw zero homicides. Just when it seemed that Abbotsford was on the path to getting some well-deserved peace, tragedy struck.

In 2015, APD lost two members to suicide. “These events changed me. After that, I started paying attention” says Rich. “Suicide is a contagion, once you’re at two you’re in trouble.”

After some research, he found out that five per cent of his members were off with Post Traumatic Stress Disorder (PTSD). “I began to meet with them, asking them to share their stories, and asking them how we could be more supportive. Listening to them, I realized that I as Chief hadn’t been doing enough,” says Rich.

The suicides on his watch forced him to delve into research and learn from police psychologists about the reality many first responders were living with. “About half of all senior members are dealing with a mental health condition caused by work. Once you learn how widespread a problem is, you can’t go back,” Rich says. “You know that you probably shouldn’t try to take your own appendix out. With mental health, it shouldn’t be any different. If you’re battling with a mental health issue, you need to get help.”

In 2017, his detachment lost APD Constable John Davidson when he was killed in the line of duty. At Davidson’s memorial, Chief Rich reinforced his commitment to mental health as he instructed his members to “take a knee” if they were struggling. “If you get hurt because you’ve responded heroically on behalf of this community, doing your job, I want you to take a knee. I want you to get help. I want you to talk to a counsellor,” he urged his members during Davidson’s eulogy.

Rich and his team worked hard to change the culture of his organization. Their efforts paid off when in 2018, Abbotsford had a lower PTSD and stigma rate than other police forces in Canada. Today, all Abbotsford members have a mandatory psych check-in once a year. 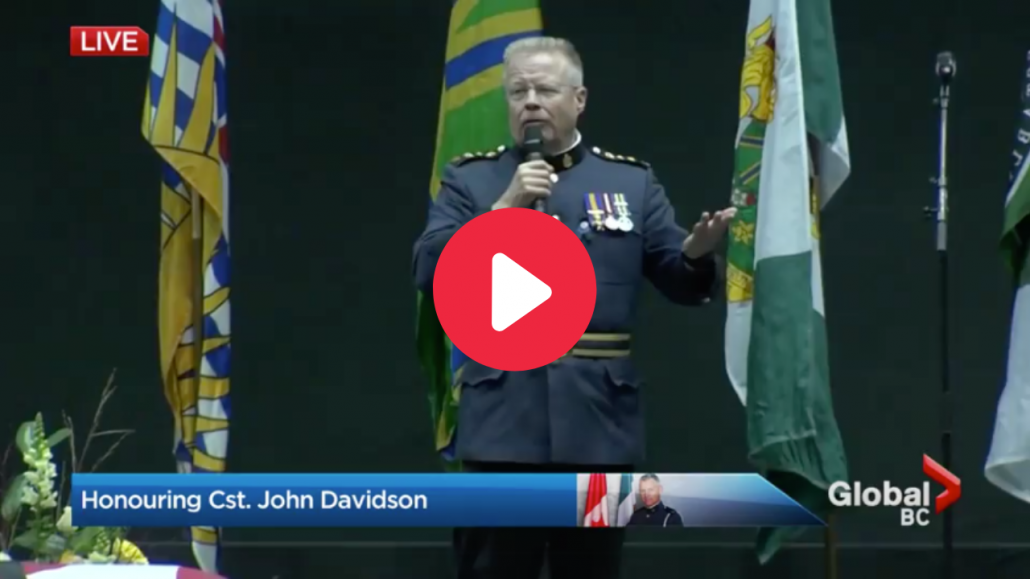 Chief Rich delivers the eulogy at Const. Davidson’s memorial, urging members to “take a knee” if they are hurt.

Rich acknowledges trauma and mental health as major challenges for police forces across North America. “A lot of the police issues we are seeing in the news today stem from these toxic cultures that have been allowed to take root,” says Rich. “Having cultures of toxic masculinity often breeds competitive teams and teams that don’t show weakness. This can manifest itself in things like excessive force.”

When it comes to mental health initiatives, Rich says that although it helps to have senior leadership buy-in, there’s still a lot that can be done even by junior members. “Informal leaders have a lot to do with changing culture,” says Rich. “Not only can they help themselves, but they can also learn how to help others.” 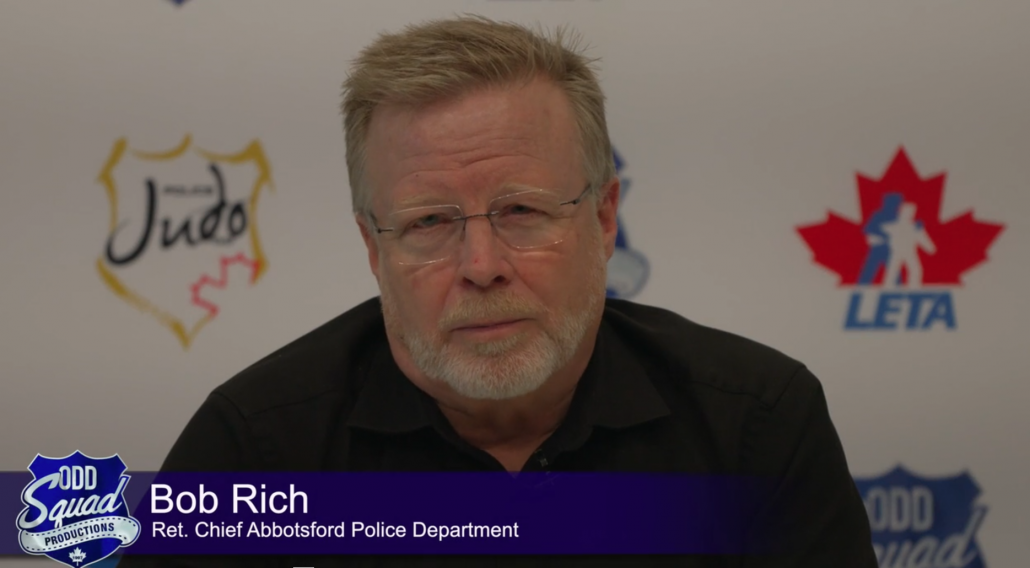 Dec 10 or Jan 27: Join us for Trauma, Metal Health and our front line responders.

Rich worries that unchecked trauma can have devastating effects, the worst of which being suicide. “Far too often, police officers ignore operational stress injuries, but there are strategies that members can use both personally and with their teams to ensure that the trauma they’re exposed to doesn’t turn into PTSD,” he says. “Police officers often have a container in their gut where they store their traumas and put a lid on it. After 10-20 years, that lid can blow off.”

Although retired, Rich has no plans on slowing down. He’s currently articling to finally become a lawyer—the profession he long ago abandoned for policing. He also works with a team of three psychologists teaching workshops on trauma informed leadership. For Rich, there’s still a lot to be done and a lot of culture that needs to change. His job as Chief may be behind him, but he’s not done leading.

All first responders and their families are welcome to attend Trauma, Mental Health, and Our Front Line Responders: Why Our Approach has Been Wrong All Along and Why We Have to Change.